I was recently in Uganda doing research on young people and their interaction with the pig value chain. ‘Piggery’ is still considered a dirty activity by many, but there is money in pork. For those who have been to Uganda will probably have noticed the so-called ‘pork joints’ sprawling across urban centers. These small, kiosk-like shops are very popular among Ugandans (those who are not Muslim) for a beer and roasted pork meat. These joints are often integrated businesses, oftentimes serving as a mini-restaurant and bar as well as a butchery providing slaughtering services and selling fresh meat. It is a bit similar to the milk bars in Kenya. The owners of milk bars are often engaged in multiple activities as well.

Two observations that stuck with me and that are perhaps worthy of sharing (a draft version with some summary findings can be found here, bear in mind though that the conclusions are geared towards the organization I work for, the International Livestock Research Institute ):

I) Primary production can still be a very valuable source of income for youth. Often the argument is made that young people are not interested in traditional agricultural production as the returns are modest and take time, while land and capital is required, something youth usually have no or limited access to. Usually off-farm and value added activities are suggested as an alternative, for example managing a pork joint. I have argued before (see this post) this is not always the right approach. The pig value chain in Uganda for me is another example which illustrates primary production can be an attractive option. Piggery requires only a small plot of land, little capital and gives relative quick and attractive returns.

II) It might not be surprising that non-youth (those aged 35 and above) hold negative views of youth, thinking of them as “untrustworthy and lacking patience and dedication”. However, youth themselves seem to increasingly hold negative views of their peers as well. A few months earlier I experienced the same during research in Eastern Kenya. Young people accused each other of being “lazy” and only interested in “drinking and gambling”. They no longer want to ‘get their hands dirty’. 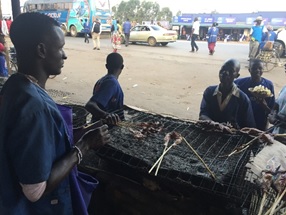 What to make of this then? Those who argue that this generation of youth is indeed lethargic and apathetic, will find confirmation of their opinion. Which is somewhat ironic, as it would demonstrate a degree of self-reflection by youth, which the same people accuse these lazy youngsters of lacking.

I am inclined to disagree. Gambling and drinking is a problem for some youth. But their lack of interest in agriculture is the result of two factors. Firstly, young people look at what their parents have been able to accomplish in agriculture in the past decades, which is very little. And the scarcity of land and climate change do not help either. Secondly, youngsters experience an increase in opportunities in the non-farm sector, both in rural and urban areas, which in turn makes agriculture less attractive. See for example a recent study on youth in Ghana, by the International Food Policy Research Institute (IFRPI), demonstrating that many “rural households have shifted their primary employment from agriculture to nonagriculture”, especially those households led by young people. That is not laziness, that is common sense. The authors also observe that “rural poverty rates are consistently lower among nonagricultural households, and the share of middle-class population is also disproportionally higher among rural nonagricultural households than agricultural households”.

Although hardly much better than a life in farming, the reality is that many youth end up in the informal off-farm sector. As such the study re-affirms what we already knew: there are more options for this generation of youth and they are probably more rational than lazy in recognizing them.